I am happy to say we stayed home this week so I spent nothing on groceries.  I do need to pick up a couple of things next week but am determined to keep it as low as possible.  The pantry and freezers are still well stocked.

Life happens....Sadie who is still in puppy phase had chewed up my inside tennis shoes.  After I broke my foot I took to wearing shoes all of the time.  I did without inside shoes for a few months, but I started to have major foot pain.  I ended up ordering some slip on Crocs for less than $20.  My feet are much happier.  Then the pump in our outside goldfish pond quit.  It keeps the water from freezing during the winter.  I opted for a slightly better model than our previous one also at less than $20.  For both of these items I do have emergency money set aside.

In the win column I ordered pet food from Chewy.  The prices were the same or lower than the big box store.  I was not at all tempted to order any unnecessary non-pet extras.

I added two items this week for Valentine's. 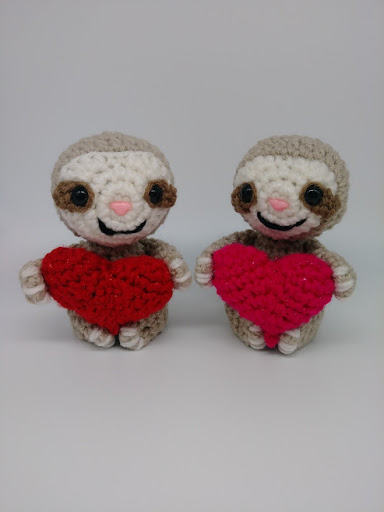 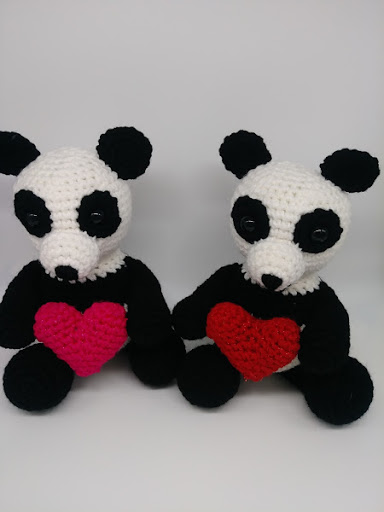 Varnished Without a Trace by Misty Simon is the fifth book in the Tallie Graver Mystery series.  Tallie is taking some time off from her cleaning business to enjoy the Christmas season with her boyfriend, Max.  She finds herself playing referee between her mother and grandmother though.  That leads to Tallie discovering the body of her Aunt Ronda and in the middle of another mystery.  The mystery is a bit on the lighter side, but I do like the series.  While not my favorite in the series, it is a good holiday themed mystery.

The fifth book in the Kebab Kitchen series by Tina Kashian is Mistletoe, Moussaka, and Murder.  Lucy is taking a morning off from Kebab Kitchen to take part in a Polar Bear Plunge along with many others from Ocean Crest.  When a fellow polar bear is murdered, Lucy finds herself in the midst of another mystery.  The problem this time is she is hard pressed to find someone who wouldn't want the man dead.  This is another of my favorite series.  This is a classic cozy with a fun female lead, mystery, and just a hint of romance.  It is a good, relaxing read.

A Case of Cat and Mouse by Sofie Kelly is the twelfth book in the Magical Cats Mystery series.  When I read the "magical cats" part, I felt certain I was not going to like the book.  I could not have been more wrong. Even though I have not read any other books in the series, I had no problem jumping right in with this book.  Librarian Kathleen is hired to help with research for a cooking competition.  After she discovers one of the judges dead, she finds herself doing investigation along with the research.  While the cats did have "magical powers", it was not the focus of the book and certainly not as out there as I feared.  This could easily become one of my favorite series!

I decided that trying to do year long goals just did not work form me.  Instead I am going to with monthly goals.  I will pick 2-4 things I want to work on during the month.  Let's get right to January.

1.  Pantry Challenge - I am budgeting $30 for the entire month for grocery spending.  Our pantry and freezers are full.  I half jokingly told my husband that I was going to open the freezer and grab the first thing I saw.  The truth part is that I am doing that with our refrigerator freezers.  They are just a mess and are driving me crazy.  My ultimate goal is to use the kitchen refrigerator freezer for the current week's meals.  The pantry refrigerator freezer will be for leftovers and breads.  Our main freezer in the laundry room will be for stocking up and larger stuff.

2.  Spending Freeze - If we can do without it, we will.  I do have money set aside for some purchases such as garden seeds.  Of course bills, pet foods, etc will be allowed.  I just want to cut out any extra purchases.  I started out by skipping my Amazon Subscribe and Save this month.  Nothing on there was a true need so I saved a bit to start off.

3.  Add Eight Items to My Etsy Shop - My Etsy shop did well this past year so I want to expand it a bit with new items.

Are you setting any goals for the year?  I would love to hear from you so I can cheer you on.  Let's make 2021 awesome!!

I had good intentions, but they fell by the wayside last year.  I was busy with crochet projects.  We stayed home 99% of the time.  My life was so dull and quiet I decided not to bore you all with what was (was not?) happening.  Tomorrow is a new year, and I am determined to make the most of it no matter what. 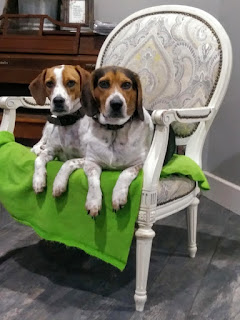 These two are best friends, and it feels like Sadie has always been here.  In reality she has been with us for eight months.  She is a totally different dog.  She loves pets and cuddles.  When she sees one of her people whether it has been a day or a couple of hours, she greets them with a squeal and proceeds to "talk" for several minutes.  Being home all of the time with her has really helped her settle in and feel comfortable.
That is the excitement from here.   I hope all is well in your part of the world! Stop back by tomorrow for my goals post.

A Shot of Murder by J.A. Kazimer is the first book in the Lucky Whiskey Mystery series.  Charlotte Lucky returns to her hometown after many years away to help run the family distillery following her grandfather's heart attack.  When an ex-boyfriend is found dead with her grandfather the number one suspect, Charlotte sets out to clear his name.  The first clue that the main character would not be likable is in the first paragraph of the book when she takes a cheap shot at Burt Reynolds. Sadly this was the first of many cheap shots which included small towns and southerners.  I could have also done without the repetition.  The author must have assumed that all readers have the memory of a goldfish.  It has potential but needs some serious work for the future of the series.

The second book in the Georgia B&B Mystery series by Anna Gerard is Peachy Scream.  Nina finds herself hosting a Shakespearean acting troupe.  She is annoyed to find that the director is Harry, who claims to be the heir to her B&B.  When the lead actor is found dead on the property, Nina with help from Harry is determined to solve the mystery and save her B&B.  I enjoy the mix of Nina and Harry.  The mystery had plenty of twists and turns to keep me guessing until the end.  I am looking forward to the next book in the series!

Digging Up the Remains by Julia Henry is the third book in the Garden Squad Mystery series.  Lilly and the garden squad are hard at work on both their own gardens and the town's anniversary.  When a nosy reporter is found dead on the 10k race route, Lilly wonders if it was an accident or murder.  I enjoy the characters in this series.  They mesh well together and make the story enjoyable.  Add in a strong mystery, and this is an excellent book.

Quiche of Death by Mary Lee Ashford is the third book in the Sugar &Spice Mystery series.  Sugar and Dixie have moved on to their next cookbook, a family cookbook for the Arbor family who made their fortune in quiche.  I feel like with this book the series has settled in nicely.  Sugar and Dixie work well together along with several fun supporting characters.  When a guest at the Arbor home is found dead, the entire family and staff are on the suspect list.  This is an enjoyable cozy mystery with just a touch of romance.  I am already looking forward to the next book.

The first book in the Sea Glass Saloon Mystery series by Sherry Harris is From Beer to Eternity.  Chloe is a librarian in Chicago, but she travels to Florida to fulfill a promise to a friend.  Chloe takes a job at the Sea Glass Saloon to keep an eye on her departed friend's grandmother, Vivi.  It turns out that Vivi is not interested in help, but Chloe is determined to hang in there.  When a bar patron is found dead, Vivi is the main suspect.  Chloe finds her mission changing slightly as she tries to clear Vivi's name.  This was a nice start to the series, and I am anxious to see how the characters develop over time.

Knot of this World by Mary Marks is the eighth book in the Quilting Mystery series.  Martha fears that her friend and fellow quilter Birdie has joined a cult. When Birdie and her husband plan to move to the commune, Martha enlists some friends to go along with hopes of changing her friend's mind.  When the commune's leader is found dead, Martha adds solving the murder to her list.  This is an enjoyable series with an eclectic mix of characters.  The mystery had a few twists and turns that kept me guessing until the end!

The Easy Baked Donut Cookbook by Sara Mellas is one of my favorite new cookbooks.  I love the variety of recipes and that they can be done in donut pans or in one of the donut hole makers.  I was so happy that I had held on to the electric donut hole maker I bought years ago.  Most of the recipes were very easy to halve if you wanted fewer donuts/dounut holes.  The donut holes were delicious and easy to make.  Most recipes could be made with ingredients in my pantry.

The Southeast Native Plant Primer by Larry Mellichamp and Paula Gross is a collection of plants perfect for those living in the southeast.  It is packed with information on everything from grasses to trees.  I love that each plant had detailed growing information including where to plant and the growing conditions.  This is a wonderful guide for those new to the region as well as those who have lived there all their lives.