Tomatoes are in abundance in my garden - especially the yellow pear and cherry varieties.  I wanted to do something different to use part of them.  I kept hearing people talk about tomato tarts and pies.  I looked at several recipes and could not find one that was exactly like I wanted.  I ended up creating my own.

I started by roasting head of garlic in the toaster oven and letting it cool slightly.  The base of my tomato tart is a frozen pie shell since it is too hot in my house to try to roll out a homemade one.  I spread the roasted garlic in the bottom of the shell and topped it with a layer of cheese. 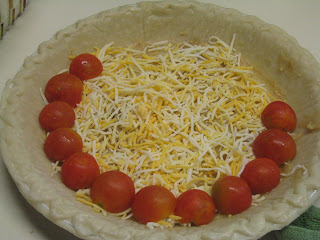 Then I began adding in the halved tomatoes.   You could also use slices of larger tomatoes.  I just piled them in about two layers thick. 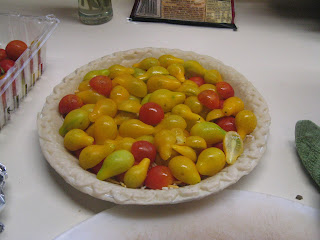 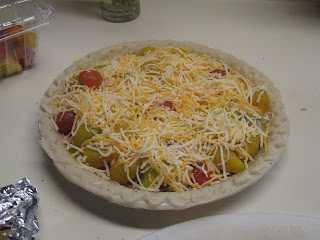 I baked this in the toaster oven at 375 degrees for about 45 minutes.  I did a ring around the edge of the crust to keep it from browning too much. 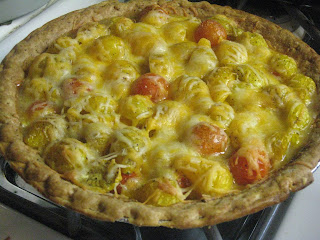 I served this as a main dish with a salad.  I was really surprised at how much W liked it.  He requested a second one less than a week later.  This will become a regular summer menu item while tomatoes are in season!
Posted by Dawn at 9:21 AM

that looks so good!!!