Feathered Friday or The Tale of the Evil Rooster

Today's post is about one evil rooster.  Last month we got some new chickens (8 hens and this rooster).  W warned me that the rooster was feisty so I was careful not to turn my back on him.  Oddly enough the rooster seemed to like.  He even let me pet him.  Little did I know this was all part of his evil plan. 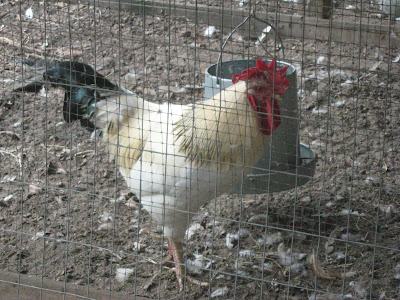 I had no idea chickens were familiar with the phrase "keep your friends close and your enemies closer".  I was lured in by his friendly act.  Fortunately I did not trust him enough to turn my back on him.

About three weeks after Mr. Evil came to live at our little farm, he attacked.  If you have never been spurred by a rooster I recommend you leave that little item off your bucket list.  When I finally got out of the pen, my right leg was bleeding and covered in puncture marks, whelps, and quickly after bruises.

It has been three weeks since and the bruises are finally fading.  Mr. Evil no longer lives with us.  He was sold two weeks ago.  I do not mind a chicken who will occasionally fly up at me, but Mr. Evil went way past that line.

Next week I will introduce you to Mr. Evil's replacement.  He is much nicer although it would be hard for him to be worse than Mr. Evil.
Posted by Dawn at 5:00 AM

Naughty boy! He is quite a handsome fella. Too bad he didn't behave.

oh dear, I wonder why he was so territorial and attacking you? Obviously not a trusting guy!!