Death on the Page by Essie Land is the second book in the Castle Bookshop Mystery series.  Shelby is co-owner of a bookstore that has a second location in a castle.  When the author from her recent book signing decides to stay overnight at the castle to research a book, it does not end well for the author.  Her body is discovered the following morning at the bottom of a staircase.  Shelby finds herself investigating the murder.  The book was good particularly the setting.  There were several side plots that drew attention away from the murder without adding a great deal to the story.  Perhaps the characters and story will tighten up as the series progresses.  It was interesting enough to make me want to read book three.

The first book in the Vintage Sweets Mystery series by Kaye George is Revenge is Sweet.  Tally has moved back to Texas and set up a sweet shop next door to her best friend Yolanda's gift basket store.  When the fridge in her shop goes out, she has handyman Gene come over to take a look at it.  It seems like Gene is dating half of  the small Texas town so it is not a big surprise when he is murdered.  Among the suspects is Yolanda which means Tally looks into the murder.  I thought the mystery portion was stronger than the supporting story.  Yolanda and Tally were constantly at odds and did not act like best friends at times.  I also wanted Tally to get a backbone.  She was dealing with an employee who was stealing.  Even when she found out the identity of the thief, she had not plans to fire the person.  If some character flaws are ironed out, this will be a good series. 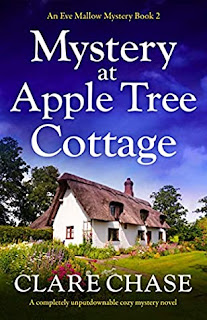 Mystery at Apple Tree Cottage by Clare Chase is the second book in the Eve Mallow Mystery series.  Eve finds herself being talked into writing a story about the living rather than the dead when Ashton Foley returns to Saxford St Peter.  The former rebellious teenager is now a designer to the stars.  When he is found murdered near his mother's home, the suspect list is long and includes people from both his past and present.  Eve returns to her normal job of obituary writer and begins digging into Ashton's life.  The mystery kept me guessing to the end.  I love Eve's life in the small English village.  This is one of my favorite cozy mystery series.

disclosure:  I received these e-books through NetGalley but was not otherwise compensated for these reviews.  All opinions are my own!
Posted by Dawn at 6:00 AM