The baby ducks are not so small anymore.  Here they are with their mother.  We had to separate them from the the boys for a short time. 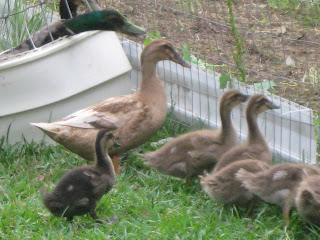 We also have more baby chicks.  One of the setting hens hatched five babies.  The second hen is starting to hatch hers and has two so far.  All of the babies are moved to the nursery pen.  They generally start going outside with the older chicks at a week old. 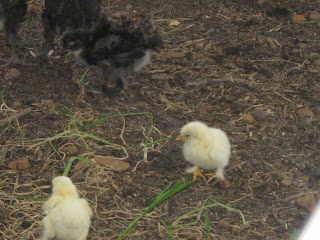 The two below are the newest babies, two buff cochins.  They are only a few days old and spend most of their time in the brooder.  Soon they will be out scratching in the dirt with the others. 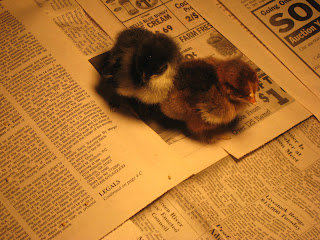 Ooooh they are so cute! I just want to hold them all. Lucky you!

enjoyed my 'visit' with you. Miss you on group but I assume you are super busy canning etc. Hope you're getting the rain and cooler temps we're experiencing today. 78F! Can you believe it? We've two or three nice slow steady showers. It feels like Fall and looks it too with the mists rising on the fields this evening.