I recently started a subscription to Eating Well magazine.  From the first issue I saved a recipe for Bev's Chocolate Chip Cookies.  It stayed on the refrigerator a few weeks.  Yesterday morning I decided to bake them.  I left them cooling while I went to town to run errands.  When I came home, only one cookie was missing.  I took that to mean that W did not like them.  He came back inside and said that he had run in the house for a moment and only had time to grab one cookie.

He ate a few more and declared them the best chocolate chip cookies I had made.  I told him they were healthier than the others and asked if he wanted to know what was in them.  He quickly replied, "No".  I did not tell him, but I will tell all of you.  I used almond flour, whole wheat flour, and coconut oil.  The cookies are very moist and not overly sweet. 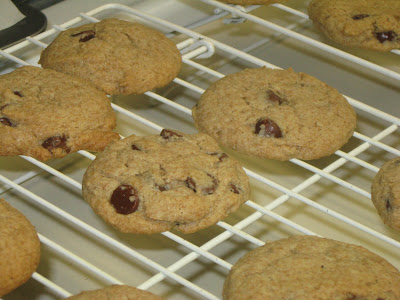 Even if you are not normally think of whole wheat cookies as yummy, give this recipe a try.  I do not think you will be disappointed.  I think if I had failed to mention to W that the cookies were healthier, he would have been none the wiser.  I will not go so far to say they are good for you, but they are certainly a better choice.

I ended up with two dozen cookies using my medium cookie scoop.  I also only used about 3/4 cup of chocolate chips since that was what I had left in a bag.  As stated earlier I replaced the oats with almond meal and used coconut oil in place of the canola oil.  I will be tossing out my other chocolate chip cookie recipes and sticking with this one.
Posted by Dawn at 2:00 AM