My four jalapeno plants have been producing like crazy this year.  I am still undecided if it is the variety I planted or the epsom salt I added a few times in lieu of fertilizer.  Over the course of four days I picked 100 peppers.  Crazy me decided to halve and stuff them all in one day.  I started that morning by halving and seeding each pepper.  I put them in the fridge and took three pounds of cream cheese out of the fridge while I went to run errands.  Back home I mixed the cream cheese with some salt and shredded cheeses.  They I settled in to stuff 200 pepper halves.  I had just enough homemade bread crumbs but ended up layering them in one big foil pan. 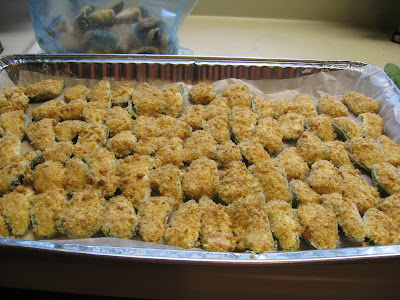 I have called myself officially done with jalapenos.  The plants are still going strong, but I am now giving the peppers away.  Even though I am not sure why they have done so well, I plan to use the same variety and epsom salt next year.
Posted by Dawn at 2:00 AM