I gave myself a pedicure.  I have given up on manicures until after I get done finishing dry wall.  I used polish I had bought with a coupon and received a compliment on my toes.

I bought tomatoes and corn from local farms.  The corn was creamed and put in the freezer going into sale purchased freezer bags.  Part of the tomatoes were turned into Rotel style tomatoes and some were plain.  I had picked green tomatoes to make into pickles.  I opted to get the tomatoes in varying degrees of ripeness so I could spread the canning out over a few days.  While it might not be cheaper over purchasing canned tomatoes, I think the flavors are much better. 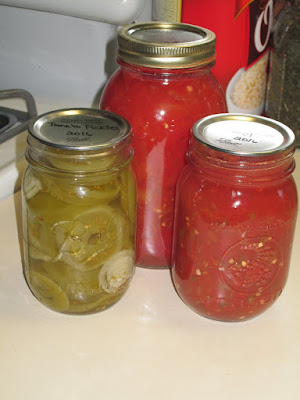 I used peppers from the garden in the Rotel style tomatoes.  I also re-used jars that I have collected over the years.

I had a Amazon Prime Pantry box returned by UPS due to damage.  I emailed Amazon to ask that the items be reshipped and requested a refund of the shipping charge.  Amazon quickly processed the refund.  It never hurts to ask for what you want as a resolution to a problem.

I made and decorated a giant chocolate chip cookie for one of my Bible class students.  I am not sure how much a big decorated cookie costs, but I feel certain it is more than the $5 I have in the treat.

I picked flowers from the garden to use as decoration inside the house.

I dehydrated oregano from the garden.

Cantaloupe and watermelon are in season here and cheap when purchased from local farms.  W has been eating cantaloupe, and we share the watermelon.  He took these in his lunch.

I gave the rabbits from over-sized cucumbers from the garden as a treat.  The chickens got the cantaloupe and watermelon rinds.