The internet was down last weekend and part of last week so I am combining two weeks of savings in this post.

W's parents came over several days to help us put up dry wall in the new house.  I planned easy meals to feel everyone on those days.  We had chicken salad with homemade bread and turkey sandwiches using a turkey breast I baked.  I also served ham steaks (bought cheap on sale with coupons), homemade macaroni & cheese, and green beans and potatoes from the garden.

Every so often a crew comes through to trim trees off the power lines.  They also have an industrial chipper and give away the wood chips.  We were able to get two loads for free.  I plan to put this between the raised beds to help control weeds. 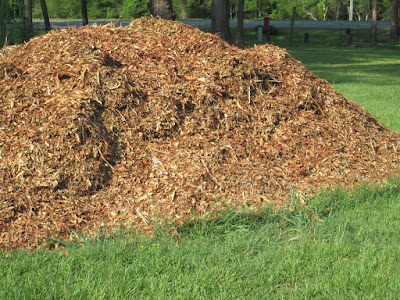 I harvested tomatoes, peppers, cucumbers, and herbs from the garden.

I pre-planned dinners for our errand days so we would not be tempted to purchase take out.

We bought culled watermelons from a local farm for $1 each.  They were still perfectly delicious but not nice enough to be sold at market.

We continued to work on the new house ourselves.  It means progress is much slower than if we hired everything out.  Not having a house payment at the end will be completely worth it.

I divided up a container of grape juice and froze it in two cup portions.  I like to add juice to my homemade herbal iced tea.  I usually use pomegranate, but it has not been on sale recently.  The grape juice was in the pantry and made a good substitute.

I opted to save my time by turning down a teaching job several towns over.  The pay would not have been enough to make up for the driving and class prep time with everything else I have going on right now.
Posted by Dawn at 7:44 AM

What a deal on the watermelons! We seem to buy one every week and that would be so nice to get them at that price.