Sadly I have no picture for the first new recipe:  Loaded Chicken Salad.  Initially I was very interested in trying this new recipe.  When I started mixing it all together, I wondered if it was going to be a big flop.  Then I served it, and W declared it the best chicken salad I ever made.  It is not your usual chicken salad, but that is not a bad thing.  In this case being different is very, very good.  I am happy to say that the loaded chicken salad was even better the next day.  I am adding this to my summer sandwich rotation. 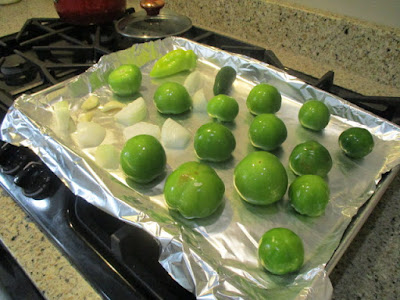 The second recipe is Roasted Tomatillo Salsa.  I did a smaller version of the recipe using tomatillos from a local farmer's market.  I followed the recipe but left out the cilantro.  My problem is that it tastes like stink bugs or how I imagine a stink bug would taste based on the way it smells. It was delicious although on the spicier side, but I love spicy foods.  W liked it as much or better than our more traditional salsa.  I liked it enough to make plans to add tomatillos to the garden next year.  The directions on blog are excellent.

I have a couple of ideas for next week's recipe but no definite plans yet.  Have you tried anything new recently?
Posted by Dawn at 5:00 AM