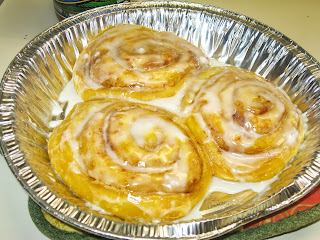 I like the convenience of frozen chicken tenders but hate all of the preservatives.  My solution is to make my own.  I purchased a 2 pound package of chicken breasts for $4.50 and cut them into chicken tenders.  I have three bowls containing seasoned flour, beaten eggs, and homemade bread crumbs.  (*The bread crumbs are a bit darker than usual because W made them.  I was not going to complain about that since he volunteered to help.) 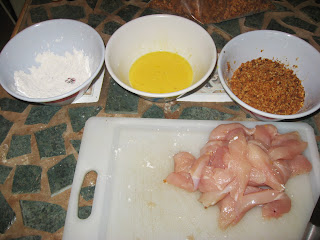 The chicken tenders get dipped into the flour, then the eggs, and finally the bread crumbs.  I place them in a pan to freeze before putting them into a freezer bag. 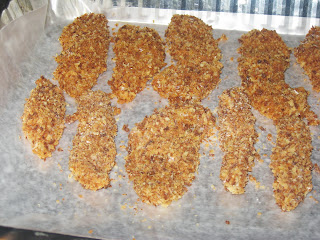 I cook these (from frozen)  for 20 minutes in a 400 degree oven.  We eat these with baked fries or chopped as part of a salad.  It is a quick meal thanks to the work I did in advance.

As part of the Holiday Grand Plan I make at least one freezer meal each week.  You do not even need to make an entire dish for this to make your life easier.  Even pre-cooking ground beef can save you time in the kitchen.
Posted by Dawn at 7:44 AM

The chicken tenders are a great idea!

send the cinnamon rolls this way!
may I have the recipe for those? they sound great and I could freeze them too.
I'm going to make lots of apple sauce this weekend (I've picked and picked so many apples) and I'm also going to freeze blackberries we have found whilst out walking. Look forward to cold autumn days when I can make things out of these frozen free goodies.

I did a little freezer cooking this week too. I did most of my work while cooking dinner and it took only a little extra effort (chopping a few more onions, boiling water for pasta) than the meal itself did. I plan to do a little more, simply because it's so nice to have these ready prepared things to heat and eat.