I waited until the last minute to post this recipe.  I use the word recipe loosely since it not hard to make and there is no definite recipe actually.  I call this a poor man's lasagna.  This is one dish that tastes better after it has been frozen.  W prefers it over spaghetti, and it is easy to make several in advance. 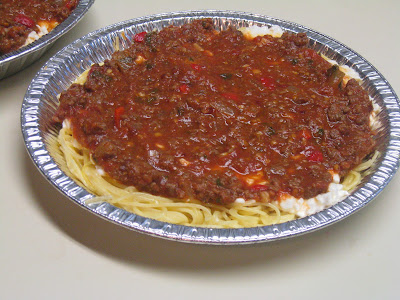 This consists of four layers (only three are shown above) so I will give you the basic and how-to for preparing it.
Layer one - cook about 8 ounces of spaghetti.  Drain it well.  While it is still hot, stir in a few tablespoons of butter, some grated Parmesan cheese (I do a good handful), and two ﻿eggs.  Stir quickly to mix everything in.  This goes in the bottom of a pie pan or casserole dish.  I usually get three to feed just W and myself.  Technically it should make two.
Layer two is super simple.  On top of the spaghetti layer, spread cottage cheese.  I used a 24 oz package on my three pies.  Use as much or as little as you like.
Layer three - cook a pound or so of ground beef (turkey, venison - whatever you like).  To this add your favorite spaghetti sauce (jar or homemade).  Spread this over the cottage cheese layer.
At this point you can bake or freeze the pies.  I always freeze them since they taste much better after a week or two in the freezer.  To cook - thaw overnight in the refrigerator.  Bake at 375 until bubbly (how long depends on how big you made them).  My two person version takes about 25-30 minutes.  Then top them with layer four - shredded cheese.  Bake another 5 minutes or so until the cheese melts.
The spaghetti pie will dish up better if you let it sit 5-10 minutes before trying to cut/spoon.  I usually serve it with breadsticks (from the freezer too) and salad.
Posted by Dawn at 6:43 AM

This looks easy and tasty! I actually have been cooking this morning and will make up a couple of these for the grandboys' lunches.

We would like these too. I think we would all prefer the spaghetti noodles over lasagna noodles too. Thanks for posting just how you do it .