While the weather is cooling down I still have some plants growing in the garden.  I have plenty of pepper plants left, but they are starting to look a bit ragged.  The heirloom tomato plants are growing well.  I might have mentioned that it is not uncommon for me to be harvesting tomatoes as late as New Year's Eve.  This is outside - not in the greenhouse.  I may be moving these plants into the greenhouse though as were planted late and not leftovers from the spring garden.
﻿ 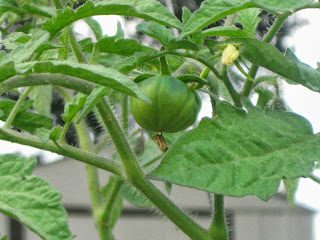 This is one of two apricot trees I have.  I need to get some bamboo skewers to stake them both up.  I started both of the trees from seed.

I had to move my pot of chives into the greenhouse.  The chickens found them and were snacking on the tender tips.  You can see where the chives have been clipped. 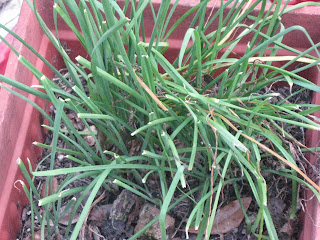 These pots of herbs are also in the greenhouse to prevent them from becoming chicken snacks.  I LOVE the pots which I bought on clearance at Lowe's last month.  I had plastic pots which fit perfectly inside them.  In the second picture you can see another tomato plant.  This one came up in the herbs which were planted in dirt from the compost pile.  I suspect that it is a yellow pear tomato since I only dumped a million or two seeds in the compost pile earlier in the year. 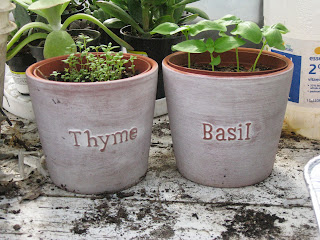 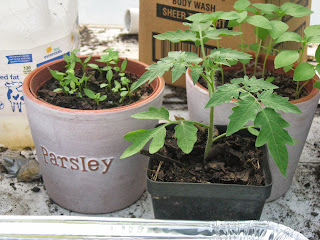 I was thrilled to discover one of my pineapple plants was blooming again.  This plant is a pup off the first plant that produced a pineapple.  It has taken just a year to produce a bloom! 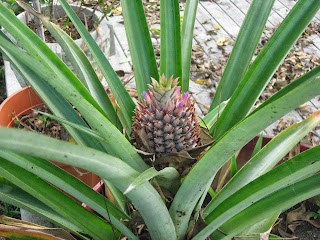 This is the ginger plant that has grown from the piece of ginger I planted.  It makes quite an interesting plant, and eventually I will be able to harvest some ginger. 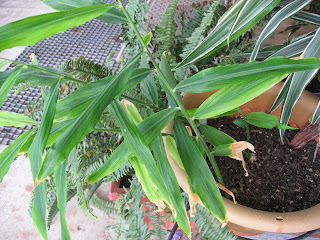 This is a non-edible portion of the garden.  I discovered that my local Lowe's discounts the succulents as winter approaches.  I bought a few at 50% and a few more when they marked them 75% off.  I will repot these in the spring and put them around the goldfish pond.

Another pineapple! How cool!

I'm interested in that ginger plant. Did you buy a grocery store portion of ginger root to plant? Did it sprout before you planted or after? I would love to grow this as I use quite a bit of ginger in my cookery.

Terri, I did buy a grocery store portion of ginger root. I let it set out until I noticed just a few tiny green shoots coming off. Then I broke it into pieces and planted it. It continued to put off additional shoots after planting as most pieces now have multiple shoots/plants.

It seems to prefer shade as the two I put in the shade have grown better. I have one pot that gets morning sun. It is growing but is lagging behind.