I had not been finding many bantam eggs lately and knew we had more bantam hens sitting somewhere.  They are very good at hiding their nests.  I had no idea that a hen was sitting under the back porch until I head baby chick cheeping one day. 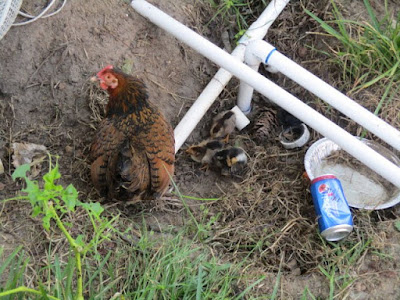 I looked and saw a mama hen with six baby chicks.  Normally I would put them in a brooder.  She stayed under the porch a few days and has just started venturing out.  She never goes very far.  For now I will let her and her babies free range. 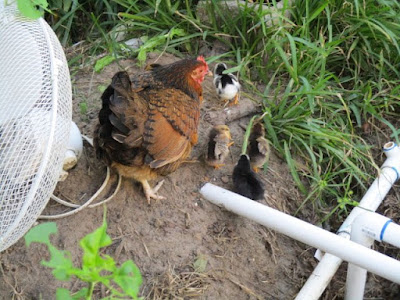 Many people will tell you that you cannot have free range chickens with cats or dogs.  I am sure that is true with some but not all.  Leo has learned that chickens are not for chasing.  Paris has had more than one mama hen fly up at her and quickly learned to leave them alone.  A couple of weeks ago I actually found Thea guarding a baby chick that had been left behind by the mother.  She could easily have killed the tiny chick but was sitting patiently by it until I heard her meowing.  I reunited the mama hen and chick.
Posted by Dawn at 5:00 AM