I finished crocheting the baby blanket and added in some baby wipes and baby lotions from the pantry.  It made a nice, but thrifty gift.

I finally had a week where everything would not fit into the normal trash cans.  That was after filling ours, my parents', and my aunt's (all with permission).  We had a large box of styrofoam.  I gave in and let W put it and a bag of trash for weight beside the regular can. 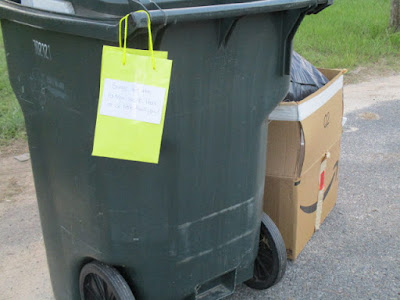 I did leave a bag of snacks from the pantry (crackers, gum, individually wrapped brownies) and a note of thanks for the trash collectors.  I think a small thank you is nice since it did mean extra work for them.  I also have not made a habit of this and usually try to hold onto trash for another week until it will fit.  It would have taken a month to get rid of the stuff in that box though.

I made meals at home although they have not been fancy.  It was much cheaper than eating out.

We continue to provide the labor for work on the new house which is a huge I can see why savings.  I can see why people would want to hire things out rather than doing it themselves.  We are capable of doing it so we will.

I shopped around for containers for organizing the new pantry.  I bought some things at Dollar Tree and others at Wal-Mart rather than online to get the best prices.

I painted my nails myself.  I have no idea what a manicure and pedicure would cost locally.  I had all of the polish so it cost me nothing this time around.

I made a batch of elderberry syrup.  We take this each fall/winter to avoid getting sick. So far it has worked for me three years in a row.  The cost is affordable since it keeps us healthy.

I watered the garden with water from the air conditioner and from Hurricane Hermine.  The rain (nearly six inches) from the storm really perked up the garden.  I think I will get a nice harvest of peppers it frosts.
Posted by Dawn at 5:00 AM