Death of a Pumpkin Carver by Lee Hollis is book eight in the Hayley Powell Food and Cocktails Mystery Series.  Hayley has to deal with the return of her ex-husband Danny and the suspicious death of his moonshine making uncle.  Included are several pumpkin recipes.  I enjoyed the book, but the mystery seemed to be lacking.  The death of Danny's uncle was an afterthought as far as the story line went.  When I read a cozy mystery, I am reading it for the mystery as much as the cozy portion.  This is a good book if you are looking for something very light that does not require much thought. 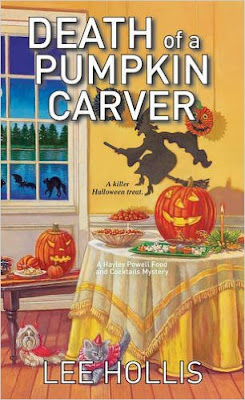 Auralee Wallace's second book in the Otter Lake Mystery series is Pumpkin Picking with Murder.  While the title scream autumn, this book could have taken place at any time of year.  At first that bothered me.  I chose it based on that fact that it was autumn themed.  The mystery more than made up for the lack of seasonal charm.  Main character Erica returns home with the intention of spending time with Sheriff Grady.  Those plans get way off track when a family friend is accused of murder.  Erica and her friend, Freddie, set about trying to solve the murder.  In this book, the mystery is the true star with several twists and turns.  The characters and setting are good supporters though.  I look forward to another visit to Otter Lake.

disclosure:  I received these e-books from NetGalley but was not otherwise compensated for these reviews.  All opinions are my own!
Posted by Dawn at 5:00 AM