A Catered Tea Party by Isis Crawford finds sisters Bernie and Libby catering an Alice in Wonderland tea party for a frustrating client, Zeb Zalinsky.  Zeb is murdered in the middle of the tea party, and his pricey teapot disappears.  While the idea for the book was something I thought I would love, I had major problems connecting with Bernie and Libby.  I struggled through the book because I did not care for any of the characters.  The story had no rhythm to it.  I have not read any other books in the series which might have caused me some problems.  I will give this series a pass in the future. 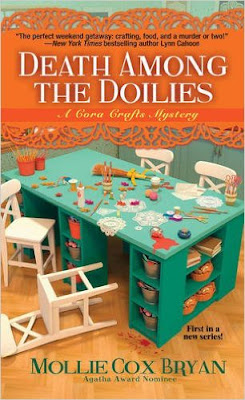 Maggie Cox Bryan's latest book is Death Among the Doilies.  I have read other books by this author.  This is the first book is the Cora Crafts Mystery series.  This book is packed full of action and side stories.  It reminded me of an action movie with so much going on.  Cora and her friend Jane move to a small town in North Caroline to open a craft retreat.  Problem after problem arises nearly ruining the first retreat with the worst being Jane becoming a person of interest in a murder.  The characters and basis of the series (the craft retreat) are wonderful.  I am looking forward to more books in the series!

disclosure:  I received these e-books from NetGalley but was not otherwise compensated for these reviews.  All opinions are my own!
Posted by Dawn at 5:00 AM