I apologize for being late with this post.  I have been under the weather for a bit with two different things at two separate times.  In between I did manage to try two new recipes.

For week six I made popovers.  I had wanted to try them forever, but I just never got around to it.  One day we were having ham and corn chowder for lunch, and I decided popovers would be a nice addition.  We liked them well enough that I plan to get a popover pan so they can be done properly.  I did not get a picture as I simply felt too bad.  We also ended up with a guest that day so all of the popovers were eaten.

Week 7 had a few days when I felt better.  We were having a meal of leftovers from the Valentine Banquet at church.  Our pastor had asked me to make rolls.  At the last minute I decided to make a dessert.  I had seen a recipe from King Arthur Flour for a Tanyard Farm Buttermilk Cake.  I had all of the ingredients on hand, and it was basic to make.

At the time I did not take a photo.  It was late, and I figured I would have plenty leftover.  The plan was to get a good picture the following day.  This is what I brought home: 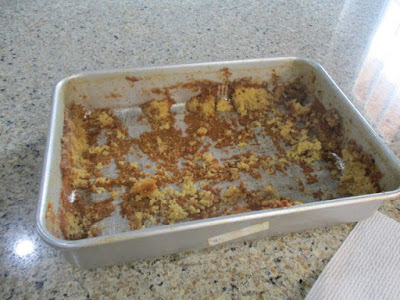 I cannot begin to tell you how much everyone loved this cake.  I thought there was going to be a fight for the extra pieces.  I was not going to step in the middle of that just to get a piece for a photo.  Instead you get a picture of the empty pan, which I say is the best sign of how good a cake was.

If you get the chance, I highly recommend this cake.  The crowd I served this to is hard to please.  For them to argue over who would take the extra pieces home means it was very good.

I have no idea what I will make for week 8, but I am certain that I will find something.
Posted by Dawn at 5:45 PM