It is hard to believe that I still had a pumpkin on my front porch in March.  I know.  I know.  That was really pushing it.  We had a really cold weekend, and I finally decided it was time to cook the pumpkin.  I baked it in the oven and scooped out the very bright flesh.  This pumpkin sat long enough to be pure sugar. 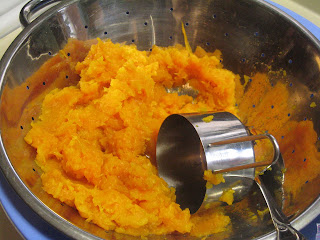 Once it drained I divided it into two cup portions to put in the freezer.  It will become yummy pumpkin cinnamon rolls.
At the end of March ﻿I was gifted a flat of six pints of strawberries.  About a third were past saving, but I managed to salvage nearly 3.5 pounds. 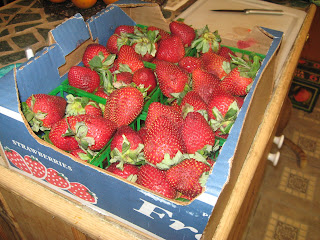 They were very ripe, and I decided they were perfect for dehydrating.  I was pleased with the outcome.  Dehydrating enhances the sweetness of everything.  Even bell pepper tastes like candy once it has been dehydrated. 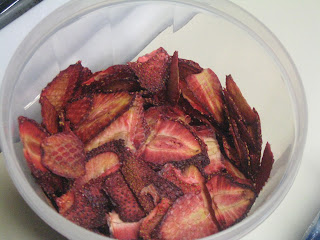 They are a yummy snack, but I can also see using them in muffins or breads.  I did not have room in the freezer for 3.5 pounds of strawberries so this was a nice alternative.
Posted by Dawn at 7:00 AM

I do not know as if I knew you could dehydrate strawberries - not that any would last that long at my house!!