I had hoped to get caught up this week, but catching up will have to wait until next week.  Meals ended up being tried and true recipes rather than new ones.  All of the cozy mysteries I read did have me craving scones.  I searched King Arthur Flour for a recipe.  I ended up choosing this recipe.  It was a basic scones recipe with room for creativity through add-ins.

I did follow the recipe fairly close.  I used half and half since that is what was in the refrigerator.  I ended up with 1 1/2 cups of add-ins.  My scones have mini chocolate chips and chopped almonds.  I had both in the pantry.  I would have added dried fruit, but W is not a fan of dried fruit. 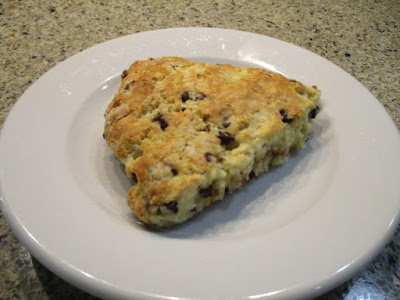 Freezing them prior to baking definitely helped. I added a touch too much liquid and could not separate them until after their stay in the freezer.  They turned out very well.  I might not make these every week, but they are a nice treat.  I also liked that they were not overly sweet even with 3/4 cup of mini chocolate chips.

I have chosen two recipes to try next week which will put me back on track.  I am going to make a chicken and mushroom dish and also a homemade version of a boxed rice mix.
Posted by Dawn at 5:00 AM

Thanks Dawn, I saved this recipe. It sounds good. I have mini chocolate chips from Aldi in our pantry.