We had a late thunderstorm last night which kept us up later than usual.  Between the wind and weather alerts, sleeping was next to impossible.  We decided to sleep in this morning so meals times were a bit off.  I neglected to take pictures of anything.  I made a mess prepping dinner.  So you will not be completely picture-less, Lucy volunteered to pose. 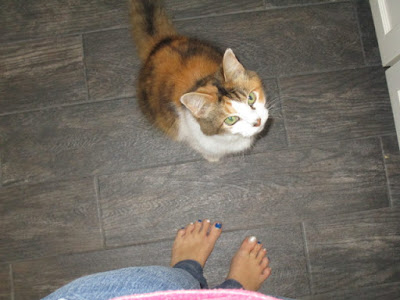 Breakfast for W was cereal.  Are you surprised?  Honestly if I let him, he would eat cereal for every single meal.  I had some of my homemade pancakes from the freezer.

Dinner was spaghetti pie (which I call poor man's lasagna), salad with lettuce from the garden, and homemade bread sticks.  I put two spaghetti pies into the freezer as well as two servings of bread sticks.  At this rate I will never put a dent in the freezer.  W pointed out that all of the ingredients were from the pantry so I was making progress somewhere.

Supper was barbecue sandwiches with pork and pineapple hamburger buns both from the freezer and chips left from holiday celebrating.
Posted by Dawn at 11:00 AM